The Federal Open Market Committee (FOMC) of the Federal Reserve Board met July 28-29 with the next meeting scheduled for Sept. 15-16. The FOMC left the Fed Funds rate at 0.00-0.25% – where it has been since mid-March and where Fed messaging conveys it will stay for some time.

In addition to the rate cuts in March, the Federal Reserve Bank took unprecedented actions to provide liquidity to financial markets. These actions drove interest rates down across the yield curve as rates for longer-term bonds have continued a slow decline.

The current recession – driven by the coronavirus pandemic and associated government mandated business shutdowns – is the deepest and most severe this country has seen since the Great Depression. The length of the economic downturn is uncertain and depends on the success of the pharmaceutical industry in rapidly developing a vaccine to stop the spread of the virus and the return of consumer confidence in normalizing consumption.

The most recent interest rate cycle was more muted than any in the last 60 years, with the Fed Funds rate peaking at 2.50% in 2018 before the rate reductions began in the third quarter of 2019, as detailed in Figure 1. 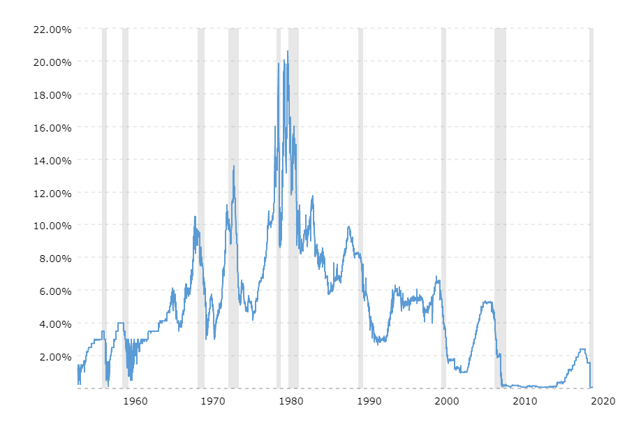 Longer-term rates have also declined since early 2020, with the 10-year U.S. Treasury yield recently hitting 60+ year lows, as illustrated in Figure 2. Frankly, the term rates do not have much room to go lower.

What has made rates plunge so drastically? In addition to the sharp decline in economic activity, the Federal Reserve Bank also dramatically increased liquidity in the financial system, attempting to maintain financial institutions’ ability to keep funds available for lending. The Fed’s balance sheet has increased significantly in size since early March (see Figure 3). There is likely more to come as the Fed attempts to keep the financial system working effectively through this deep recession caused by the shuttering of so many sectors of the economy.

So, what does all this mean? The economic damage done by the coronavirus and resulting shutdown of various parts of the economy – both U.S. and global – will likely lead to high levels of unemployment for the foreseeable future. The industries most hard hit (restaurants, hotels, cruise lines, air travel, entertainment, etc.) employed many people and won’t return to a normal level of economic activity or employment until there is a widely distributed vaccine. These industries – along with all levels of government – are taking on large amounts of debt to stay afloat during this pandemic. The looming debt levels will constrain future growth as more cash flow and earnings are diverted to service government debt.

Fortunately, the interest cost to carry this debt has been reduced as a result of the moves by the Federal Reserve Bank giving many businesses a chance to survive the downturn. Unfortunately, not all businesses will recover – especially those already struggling with profitability or heavy debt burdens before the pandemic.

Cash flow, working capital, and liquidity will continue to be critically important to survival and allow businesses to weather this storm as we all await the ingenuity of the pharmaceutical industry to develop and distribute an effective vaccine. Interest rates – especially short-term rates – will likely stay low for an extended period of time. We do indeed live in INTERESTing Times!