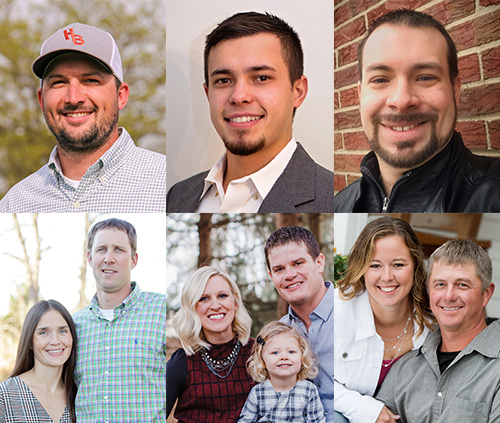 The Directors Cup presented by the cooperative Board of Directors celebrates young and beginning farmers committed to continuous learning and intentional living for a brighter future for their farm family business and community. Honorees receive $5,000 and a commemorative keepsake.

Cooperative members were selected by a panel of seven industry representatives– including one FCI Board member – based on a combination of each applicant’s unique farm beginnings, personal and business aspirations, and passion for building a brighter future for their farm business and community.

The Directors Cup award is part of the FreshRoots young and beginning farmers program, which provides lending assistance and learning incentives to farmers up to age 40 or in their first 10 years of farming.

“Today’s newest farmers need a resilient business mind and commitment to lifelong learning – especially in today’s volatile economy,” says Eric Mosbey, FCI Board Chair. “The Board of Directors celebrates the determination these beginning farmers display while developing ground-breaking skills and practices to invest in their futures.”

The following beginning farmers were selected as 2020 Directors Cup honorees:

Alex Head of Blue Mound (Macon County) is a fourth generation farmer raising corn, seed corn, seed beans, non-GMO soybeans, food grade non-GMO soybeans, wheat, alfalfa, rye, and beef cattle. Head, 30, began farming in 2010 and works with his parents and brother. He manages the row crop side of the operation and keeps the books for both their grain and livestock operations. Alex is married to wife Lena.

Mike Nelson of Paxton (Ford County) is a fifth generation corn and soybean farmer. Nelson, 34, began farming in 2013, is the sole proprietor of his own operation, and partners with his father for equipment and labor. He and his wife Amanda have one son.

Matthew and Melanie Schmitz of Valmeyer (Monroe County) are fifth generation corn, soybean, cattle, and hay farmers. Matthew is a full-time farmer and Melanie is an accountant at Bunge while serving as the farm manager and marketer. They actively farm with Melanie’s father and uncle and are currently transitioning ownership from both sets of parents and Melanie’s uncle. Matthew, 35, and Melanie, 32, began farming in 2008 and have two sons.

Andy and Monica Schumacher of Sigel (Cumberland County) are fourth generation corn, soybean, wheat, hog, and cattle farmers. Andy is a full-time farmer and custom operator. Monica is an accountant at Midland State Bank and for the farm. They farm with Andy’s father and will transfer complete ownership of the operation by the end of the year. Andy, 34, and Monica, 32, began farming in 2009 and have one daughter.

Jill and Chad Vonder Haar of Saint Rose (Clinton County) are third and fourth generation farmers, respectively. They raise corn, soybeans, wheat, barley, hay, beef, pork, chicken, lamb, turkey, and eggs. Many products are sold directly to consumers via their Main Street Pastures farm store. Jill is a full-time farm manager and operator and Chad owns an automotive reconditioning business and works on the farm part-time. They manage the farm themselves with help from extended family during busy times. Jill, 40, and Chad, 40, began farming in 2008 and have three daughters and one son.